The Desecration of the Boreal Forest on Gotland, Sweden
- and what we can do about it.

In the northern part of the Swedish island of Gotland, there is an extensive area of unique ancient wild boreal forest called Ojnare (OY-narreh) – it is home to a number of threatened species of plant and animal/insect. The Swedish-Finnish roadstone company Nordkalk has been given permission by Sweden's Supreme Court (Högsta Domstolen) to use this forest to extract limestone after a very truncated hearing which protesters believe was rigged through undercover bribery. An increasing number of protesters are now risking freedom and limb (etc) by putting their bodies in the way of the machines/diggers.
What started out as a small movement by aware “field biologists” has now grown into a full-scale stand-off between protesters on the one hand, and the Nordkalk machines – supported by the island and imported police – on the other. The Swedish Supreme Court has yet to show any sign of reconsidering the case and the government is trying to play down the whole affair, while more and more police resources, protesters, machines, journalists/media and others are being drawn into the conflicted arena.

That this threat to Earth's (and our) environment is now firmly placed in the light of international attention is vitally important, and certainly a good thing. However the vibrations of escalating distrust and the ever-present threat of non-peaceful action, especially by those whose “job” it is to “keep order” (many of whom may themselves privately believe in the validity of the protesters' actions) is a recipe for long-term damage – not just of the earth, but for everyone involved – at cell-, soul- and “locked-in opinion”-levels. What is happening in Ojnare Forest is a smaller version of what is happening over the whole world and in our skies.

We hope that the protests will stop the machines.

But the protests cannot heal what has caused the scarcity and greed in the first place; experience shows that if the protesters win, another place will be chosen for the same “fight” - and usually at a more threatening level. Most of the evil going on in terms of earth-desecration - attempts at human control of weather, environment, food and, ultimately, people - is born from feelings of need-for-power-over-by-pain. Evil is like an intense hidden hurt which intensifies until it boils over and breeds degrading chaos - those who are instrumental in promoting this destruction seem to know no other way.

When we play their game, we cannot win - the “war-zone” has no Joy, no “lightness of Being”, no ecstatic experience. But it is exactly these wonderfully ecstatic vibrancies and resonancies of delight which can turn a war-zone into a garden of change (witness what musicians have done in concentration camps!)

Many people use Breathing for Peace, or (like James Twyman) sing songs in war-zones, or send waves of HeartMath or Reiki, or hold Prayer services, etc. If you are one of these, please do so now.

There is also another way – extremely powerful.

It is a co-ordinated global orgasmic* experience. 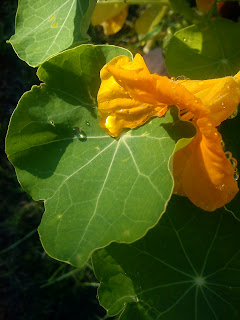 Such waves are the very initiation-point of creation – when we together-as-one are mimicking the energies of the conception of the cosmos, we are linked into that Divine Power of Unlimited Healing and Boundless Expansive JOY! There isn't anything which can resist such power! And it is said that “the Devil hates Laughter!”
Please join me in a Gaiagàsmic Wave for the Ecstatic Healing of Ojnare Boreal Forest tomorrow (Monday 3rd September) night around your usual bedtime. And remember to breathe deeply and shout and sing and groan wildly and be totally outrageously happy!
Thank you.

Time to Zap your Life?

The Grand Idea - Let's bring back the "original awareness" that everything on Earth is holy - our breathing, our sexuality, our eating, and all of Creation. Let's celebrate what people of every persuasion in every age have ever yearned for - to know in their hearts and bodies deepest peace and joy and compassion. (Click on John's picture for more.)

If you find what I write useful or fun and would like to donate...